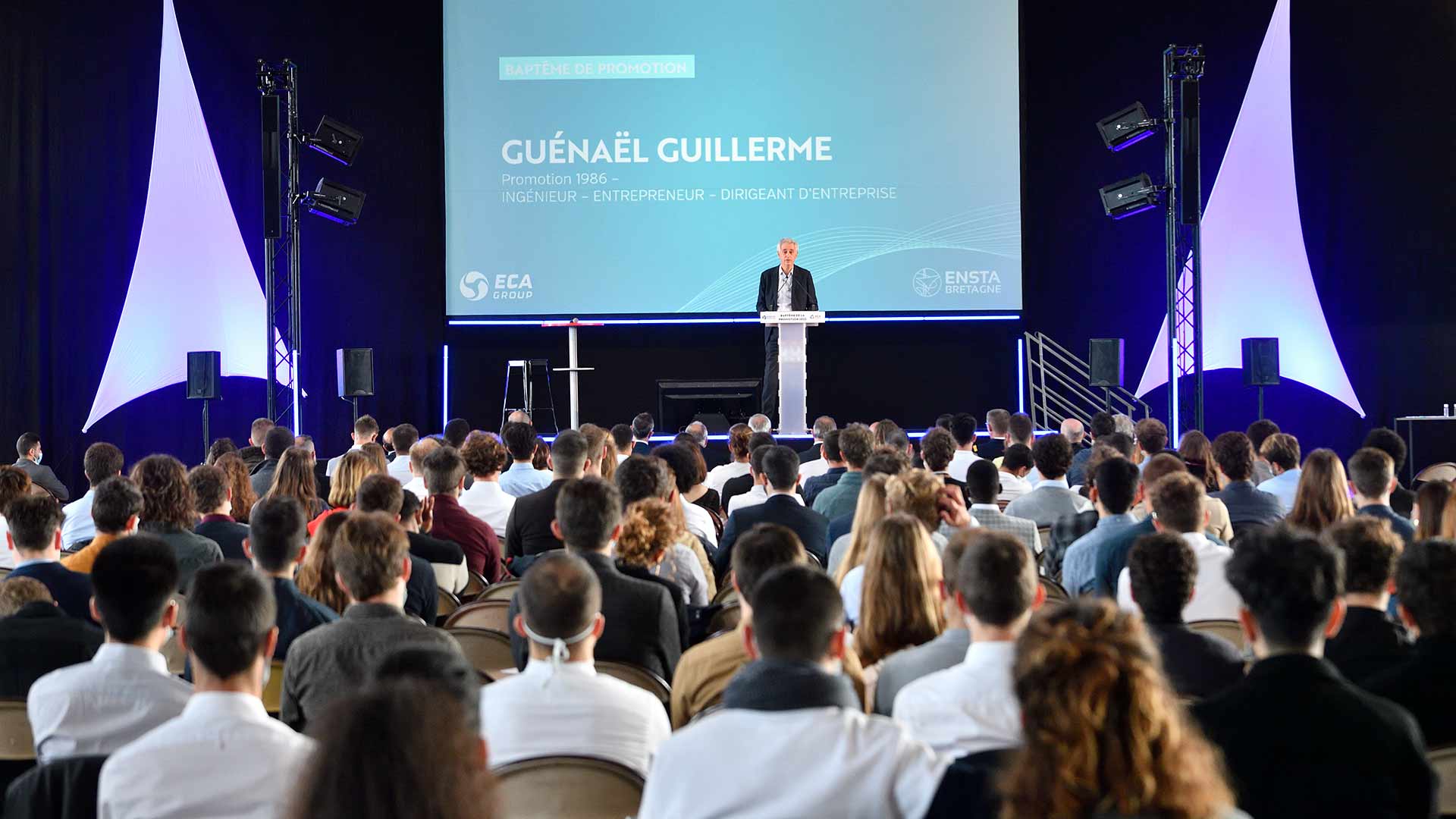 Guénaël Guillerme, ‘godparent’ of the 2022 cohort

ENSTA Bretagne
Businesses
To celebrate its 50th anniversary, ENSTA Bretagne is welcoming an alumnus, Guénaël Guillerme – engineer, entrepreneur and business leader in the naval industry – to be ‘godparent’ of the 2022 cohort. He has devoted two decades of his career to the development of ECA Group, which is renowned for its expertise in marine robotics. 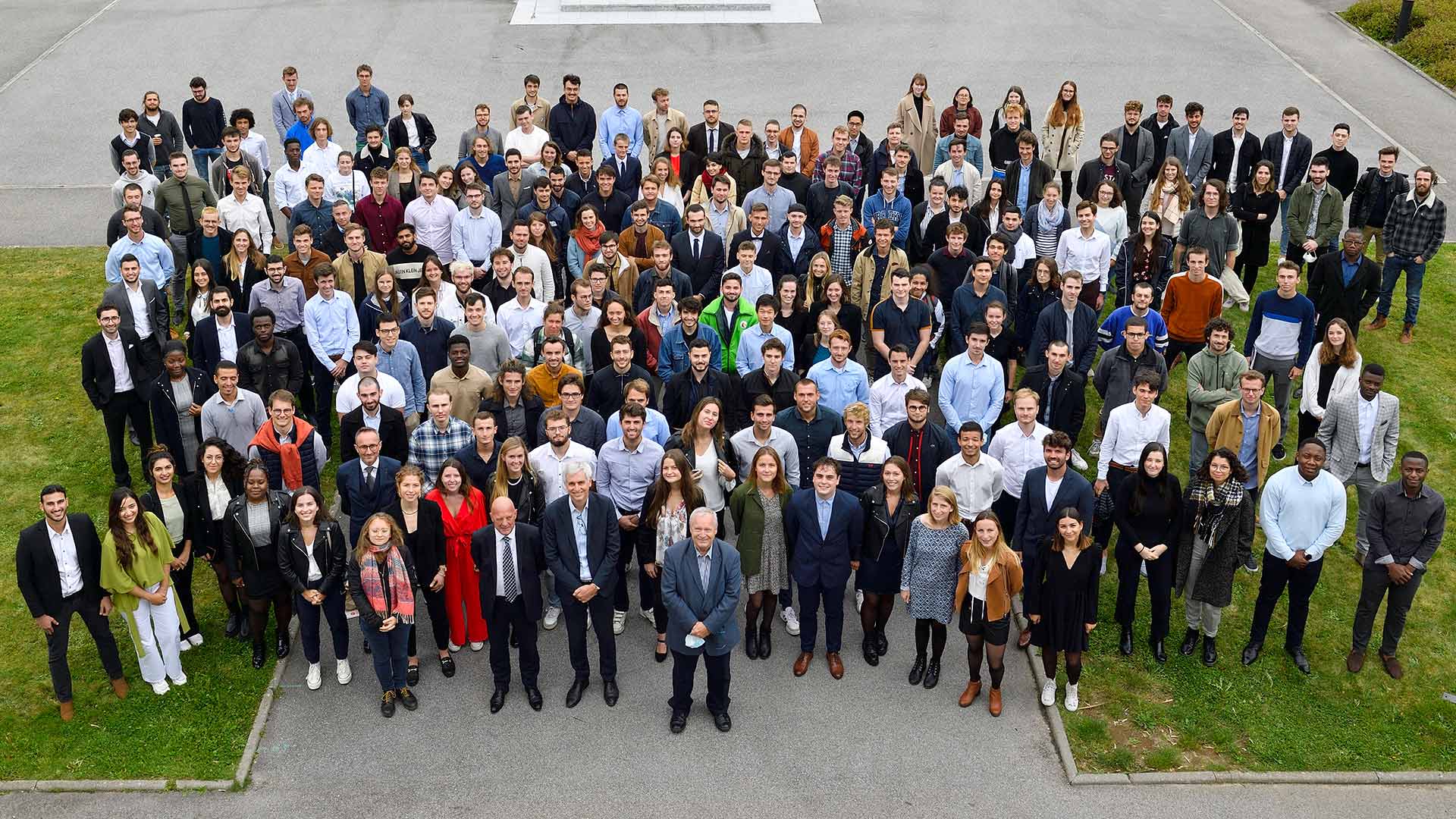 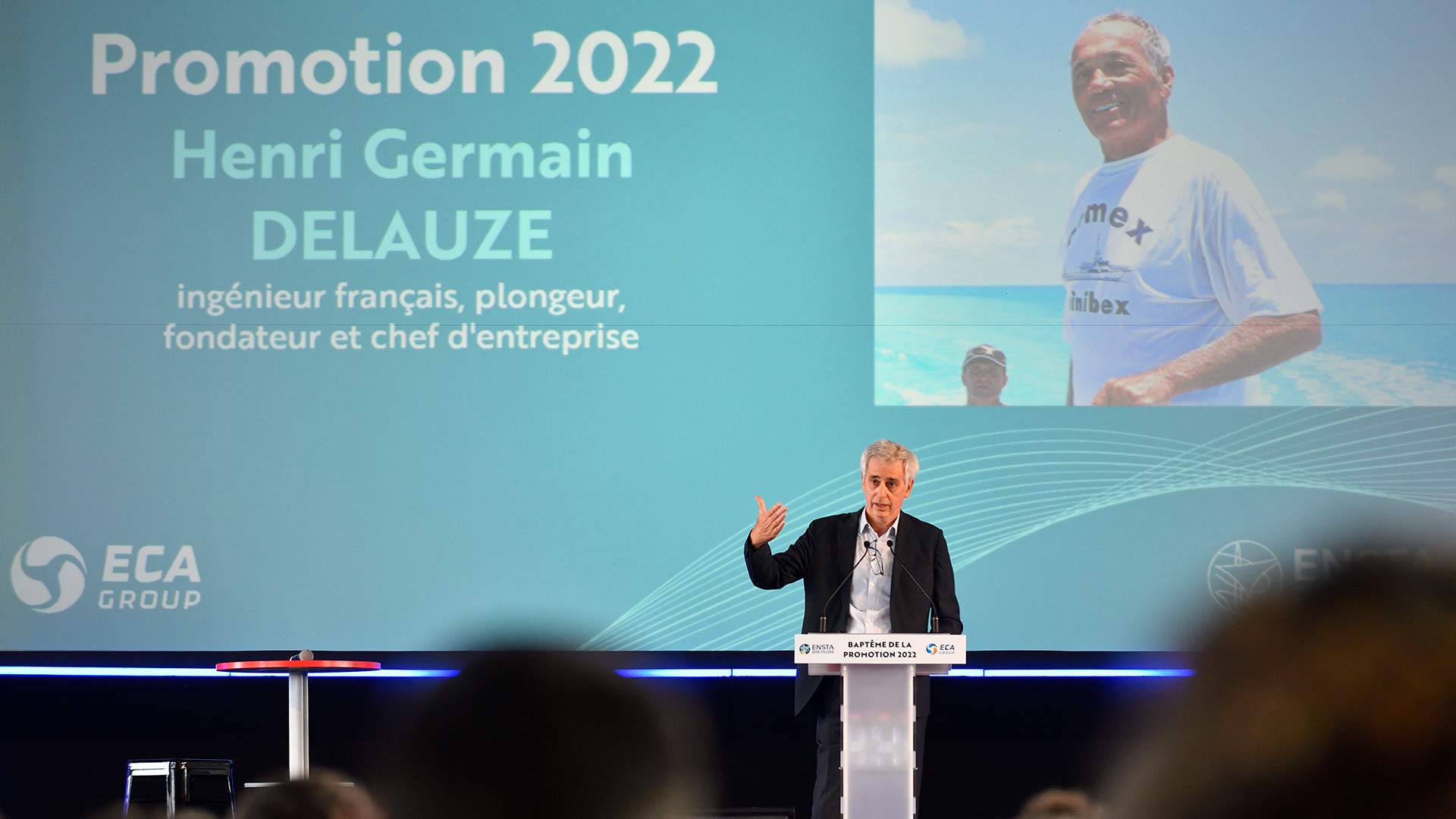 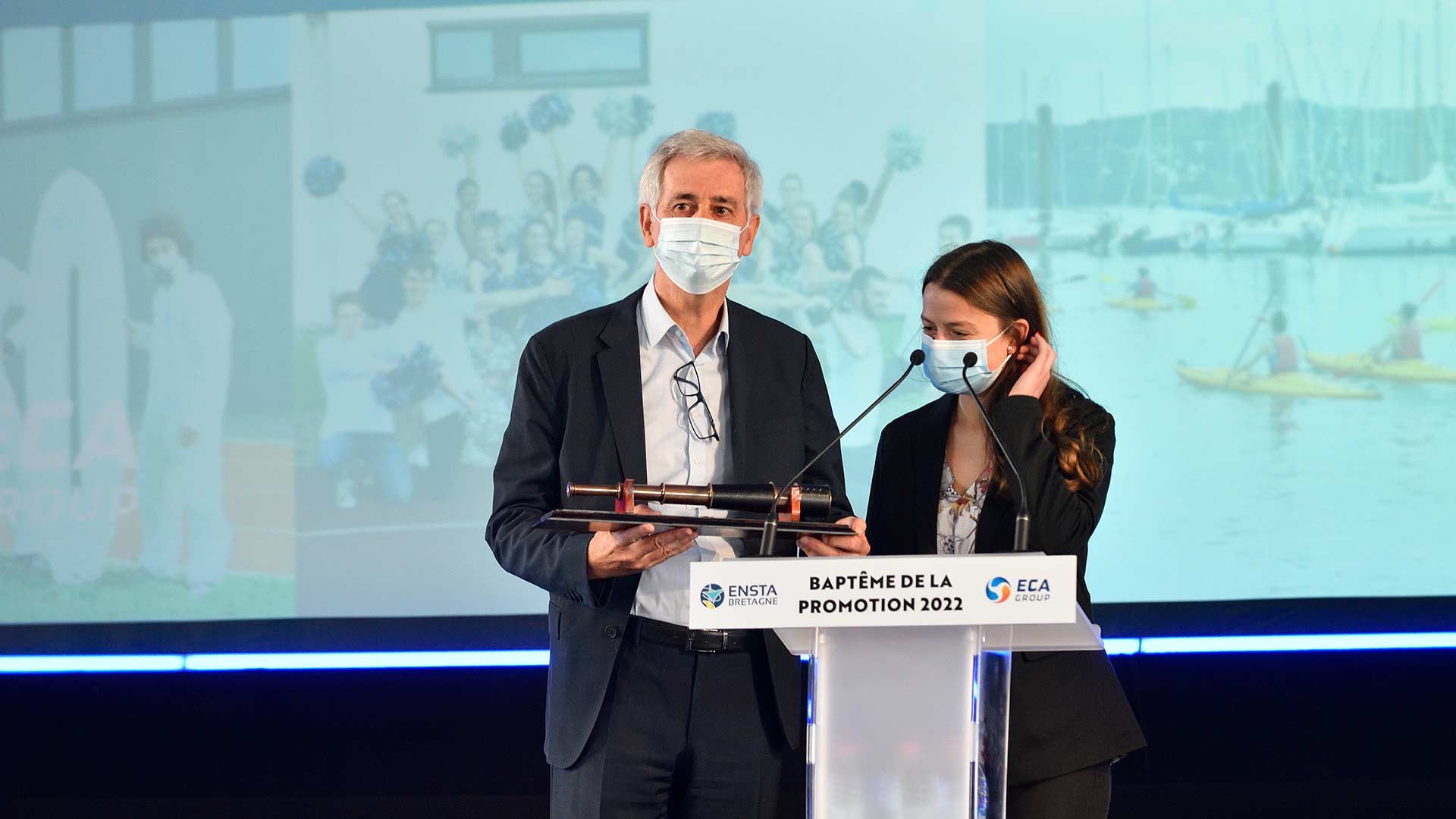 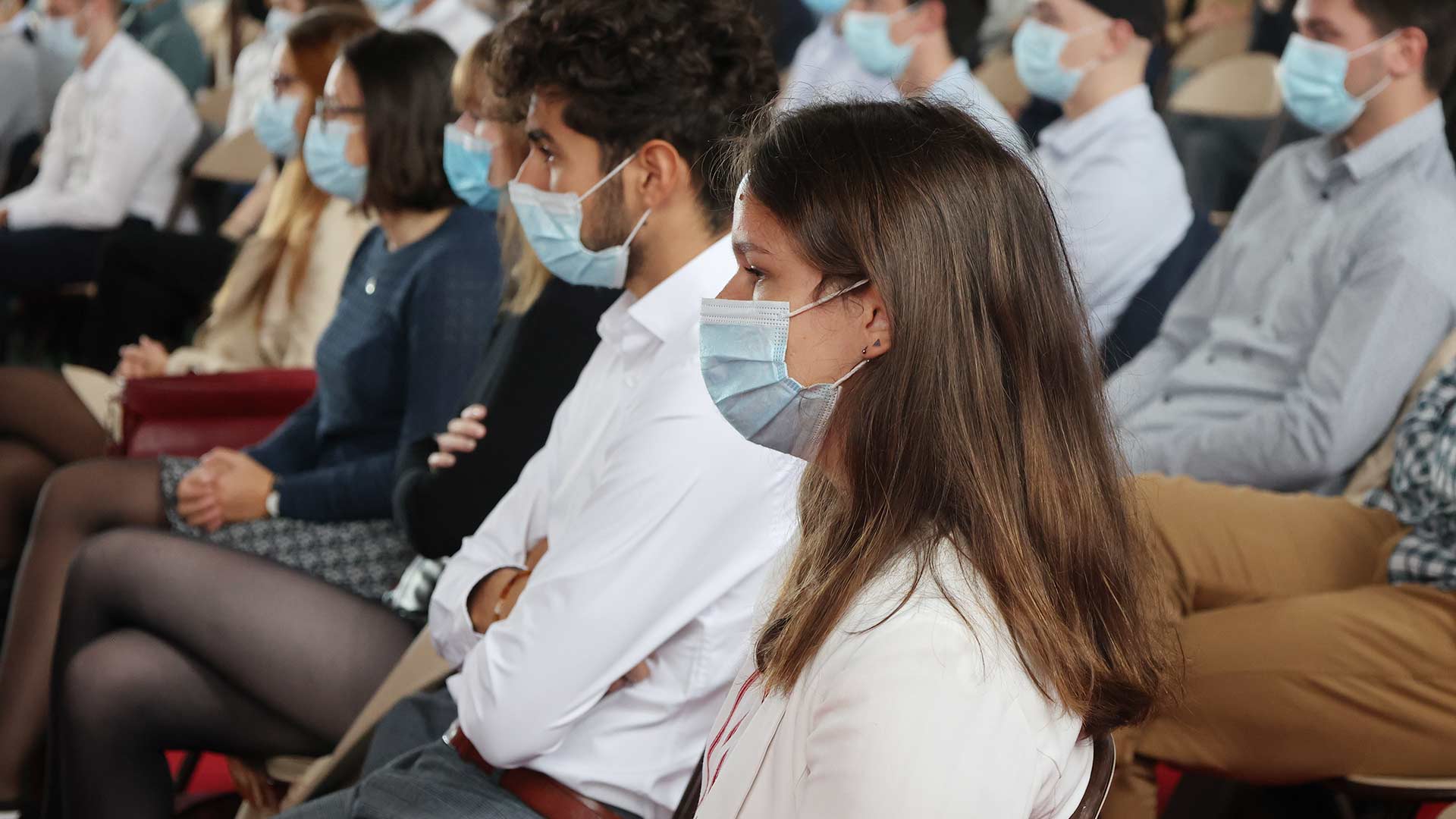 Guénaël Guillerme, ‘godparent’ of the 2022 cohort

To celebrate its 50th anniversary, ENSTA Bretagne is welcoming an alumnus, Guénaël Guillerme – engineer, entrepreneur and business leader in the naval industry – to be ‘godparent’ of the 2022 cohort. He has devoted two decades of his career to the development of ECA Group, which is renowned for its expertise in marine robotics.

The ‘godparenting’ ceremony welcoming Guénaël Guillerme, CEO of ECA and graduate of the school’s 1986 cohort, was held on Thursday September 30, 2021, on the engineering school campus. 315 students make up ENSTA Bretagne’s 2022 cohort, which is henceforth proud to be named after Henri Germain Delauze, a French engineer, diver, founder and company manager whom Guénaël Guillerme knew and who played a significant role in developing underwater robotics.

The students in ENSTA Bretagne’s "Henri Germain Delauze" cohort are beginning the final year of their studies, focusing on the transition from university to the workplace, which they will enter from March 2022 during their end-of-study internship. Guénaël Guillerme shared his expertise to help them understand the challenges that lie ahead. He also talked about his vision of the maritime world, where he has worked for 35 years, his experience at the helm of ECA Group, whose development he oversaw for nearly 20 years, his passion for entrepreneurship and the new projects he has lined up.

Born in 1962, this native of Brittany graduated from ENSTA Bretagne in naval architecture in 1986, starting out as a military engineer at the Defense, Procurement and Technology Agency (DGA) before becoming a civil engineer. He has spent his whole career immersed in the specifics of the naval world, its challenges, culture and the diversity of its industrial stakeholders, within a mid-cap such as ECA, where he worked for nearly two decades, or the likes of Naval Group, from 1987 to 1997.

Guénaël Guillerme has just stepped down as CEO of ECA Group, a position which he had held since the start of 2013.

From 1997 to 2008, he had already managed this Group, overseeing a diversification strategy striking a balance between civilian and defense activities, particularly by developing an Aerospace division, and paved the way for ECA Group’s initial public offering in 2003.

A natural entrepreneur, Guénaël Guillerme left ECA Group in 2008 and started up businesses in the Web sector. At the same time, he took over as President of Réseau Entreprendre Provence-Alpes-Côte d'Azur after setting up and leading the Var section of that network from 2004.

In early 2013, he returned to ECA Group as CEO to secure its strategic leadership as a systems manufacturer in maritime robotics.

Speaking to the future engineers studying at ENSTA Bretagne, Guénaël Guillerme drew on his threefold experience as an engineer, business leader and entrepreneur, encouraging them to invest wholeheartedly in the exciting civil engineering or defense professions that await them.

ECA Group develops complete innovative technological solutions for complex missions in hostile or restrictive environments. Its products are used by a demanding international clientele requiring the highest levels of safety and efficiency, mainly in the sectors of defense, maritime, aerospace, simulation, energy and industrial equipment. The Group has always been at the forefront of innovation ever since it was founded in 1936, keeping pace with technological progress: mechanics, electronics, automation, information technology, remotely operated and autonomous marine robotics, AI, etc.

The industrial company has a dozen engineering and manufacturing sites across France and Europe, the largest of which is based in Toulon. Many of ENSTA Bretagne’s alumni work as engineers or managers at ECA Group. Moreover, at its Brest site, ECA Group’s engineering team plays an active part in training and research alongside the school’s robotics team.

This ‘godparenting arrangement’ of ENSTA Bretagne’s 2022 cohort sets the stage for renewed and strengthened collaboration with all of the Group’s sites, with the prospect of more internship opportunities, co-operative contracts and jobs in the wide-ranging areas of expertise that the school has in common with ECA Group.

ENSTA Bretagne’s students are fully prepared for the high standards and excellence expected at ECA Group, the multidisciplinary nature of the work and the design of complex systems. On Thursday September 30, they were able to appreciate the breadth of ECA Group’s areas of innovation and chatted at length with their cohort ‘godparent’.

The ENSTA Bretagne cohort he is ‘godparenting’

Guénaël Guillerme is the ‘godparent’ of 315 students from the 2022 cohort, representing 12 areas of expertise, 25 professional profiles and 21 training programs.

They include 255 engineering students (civil and military alike, with student or co-operative engineer status), in addition to 60 students in the 2nd year of their Master’s or doing a Specialized Advanced Master (equivalent to 6 years of higher education).

These students specialize in 12 different areas of expertise during the final year of their studies before graduation, areas which represent 25 professional profiles: 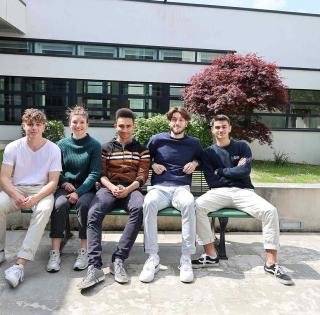 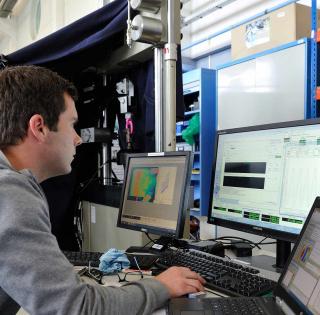