Student Life
Samuel and his team have just won the campaign for the elections of the new Students’ Union (BDE): a highlight in the life of the school, which requires weeks of planning and considerable personal investment.

Planning for the BDE campaign

When and how was the team put together?

Samuel: The team I was in came together early last November. It began with a group of four people – myself included – all in lockdown together, who soon linked up with other existing groups of friends. This meant there was real diversity as well as a good sense of unity within the list. There were students on the general engineering program (civil and military status) as well as apprentice (cooperative) engineers. By mid-December our group was complete and we could begin the first meetings.

What was your main motivation in this project?

The difficulty in keeping an adequate social life going and the desire to help the school were my main motivations in this project. I also discovered I really enjoyed working with a range of IT tools, not least Virtual Basic, and these proved invaluable in properly organizing and developing the group. These new skills, which I learned alongside my studies at the school, helped me to see these campaigns as an academically rewarding activity.

What did the planning stages entail?

The planning stages began in January, when some of us were still completing internships. The first thing to do was to share out the tasks, even though our roles within the list had still not been fully defined. Since fundraising and budgeting would take up a lot of time, that’s where we started.

What will you take away from this busy fortnight?

During these busy two weeks I gained an insight into the true personalities of the people making up the list, and the stress factors I will have to watch for if I want to maintain good group cohesion. I have learned a lot, both in terms of organization and human relations.

What were the highlights?

I’d say that the first day (when none of us knew what to expect and we were all really excited) and the last Friday were the most emotionally-charged. The first because of the sense of excitement in all of us, thanks to the availability of all the members (nearly 15 people that evening) and the last because of the stress that had gradually built up and brought underlying issues to the surface.

What is it that set your list apart from the others?

I think it was the unity of the list that was most decisive in our success. For all the different profiles can be found in our group. What’s more, we stayed very discreet throughout the so-called "pre-campaigning" period, and the discovery of the members was a big (and welcome) surprise for many.

How have you organized yourselves in the new team? Are there any new additions (clubs for example) compared with the previous Students’ Union?

The new team is organized into sections, systematically led by one of the Union members. Overall, the organization is similar to the old team.

We are currently setting up a new club: the sewing club. It already has a number of motivated members.

What are your major plans or highlights for the year ahead?

Next year, we are planning to organize sports tournaments between the different 1st year Tutorial groups and the different cohorts to liven things up at the school. Of course, we’d also like to start up the Breton Schools Tournament (TEB) again and maintain the annual ski trip
to the extent possible.
We’re also going to promote all of the associations and clubs and support the presidents with their handover. Since we (first year students) only got a glimpse of the activities on offer, taking over responsibility for them isn’t all that easy.

Do you have a message to share with future ENSTA Bretagne students who will join the school in a few months’ time?

First of all, well done for passing the competitive exams at such a difficult time. Then, our priority will be to get the list of clubs and associations and their presidents to them as soon as possible to help them to settle into life at the school as happily as possible and to realize just how many opportunities there are open to them!

For more information
The Student Union
Student clubs and societies 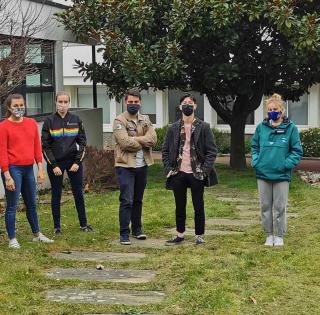